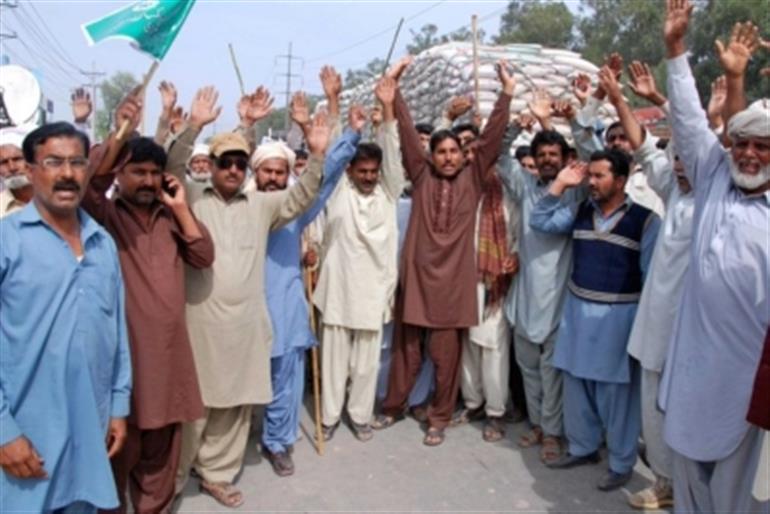 Islamabad:Over 25,000 farmers from Pakistans Punjab province have staged a protest sit-in in Islamabad, paralysing the capital city and creating travel woes as authorities have blocked roads with containers.

The farmers, under the umbrella of Kisan Ittehad, have refused to leave the capital until their demands are met by the government.

This is the second time that tens of thousands of farmers have made their way to the capital since September 21 after the government failed to meet their demands, mutually agreed through negotiations.

This has prompted the government to take preventive steps, including shutting road access to the fortified Red Zone with containers, while main highways and expressways have also been blocked.

“Farmers came from across Punjab province and demanded restoration of the previous tube well electricity tariff of Rs.5.3 per unit and abolition of all taxes and adjustments,” said an official of the capital administration.

“An end must be put to the black marketing of fertilizers and reduction of urea rate, which has increased by at least 400 per cent.”

According to the farmers’ demands, the rate of wheat should be fixed at 2,400 PKR per mound and that of sugarcane at 280 PKR.

“We also demand that the blockade of canals should be removed and water released immediately in the area. Moreover, they said, agriculture should also be given the status of industry,” said one of the protesting farmers.

The sit-in has now entered the second day as the vows to continue with it until the government ministries and politicians do not come to the negotiating table.

The protest is also supported by opposition parties, who have slammed the government for failing to provide relief to the public and masses at large and pushing them into further sufferings through inflation.