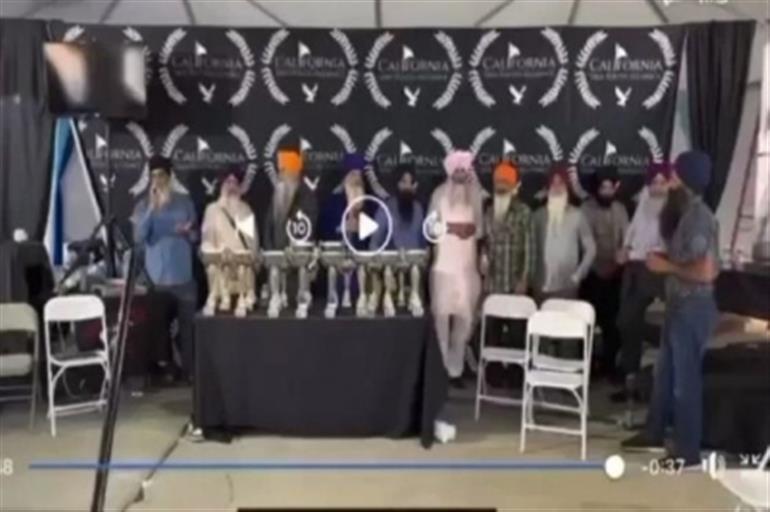 NEW DELHI: White residents living near the Gurdwara at Stockton in California, USA have demanded round-the-clock police presence in the area in view of the escalation of tension in the city after two groups of Sikh radicals were involved in a shoot-out outside the Sikh temple on Saturday.

On receipt of a phone call from a resident of the locality, the police reached the scene of the crime in less than four minutes and took three injured to the hospital.

Four suspects who were trying to flee were arrested and some weapons were seized. They have still not been released and are being questioned over the firing.

A weight lifting competition organized by the Gurdwara management headed by president Ravinder Singh Dhaliwal was in progress when the shootout took place. None of the evident devotees inside the Gurdwara were hurt, though people ran for shelter amidst the sound of gunshots as is from a viral video.

The police issued a statement later saying that the injured were out of danger and were being given treatment at the hospital.

According to sources, one Dharamvir Singh after a verbal duel with Pavittar Pal Singh opened fire at him. And in return, Pavittar fired at Dharamvir injuring three bystanders. The shooters ran away from the spot and are still at large.

Dharamvir is reported to have allegiance with the Sikhs for Justice (SFJ), an organization that is striving for the creation of a separate homeland for the Sikhs in India. The SFJ is banned in India for being a terrorist organisation.

Dharamvir is reported to have links with the Sikhs for Justice organization (SFJ) which is striving for the creation of a “separate homeland” for the Sikhs in India. The SFJ is banned in India for being a terrorist organisation.

Talking to Indianarrative.com on the phone, the manager of the Gurdwara, who did not want to be named tried to underplay the incident saying, “I am a witness to the firing. Some youths entered into an argument which led to the shooting. It is just like youngsters often fighting during kabaddi matches in Punjab.” The Stockton Gurdwara was established in 1930, the first in the US.

When asked if the tussle was over the hosting of a Khalistan flag on the roof of the Gurdwara, he said that the flag was hosted some three months ago but nobody objected to it and there was no controversy about it.

He further said that not many people were interested in the activities of the SFJ who were still engaged in registering voters for the proposed referendum 2020. “People come to the Gurdwara to pay obeisance and leave soon thereafter,” the manager stressed.

Another video going viral shows a heated abusive exchange of words between some people. One of them is heard saying, “hell with your 2020 referendum…you chamchas (sycophants)…come out and meet us, we will teach you a lesson.”

Jagmohan Singh Randhawa, a resident of Sacramento, informed this reporter that the incident had nothing to do with Sikh politics. The youths had an old enmity which led to the firing once they came face to face in the Gurdwara.

The manager claimed that some anti-Sikh forces were trying to defame the community settled in the US by spreading rumors.