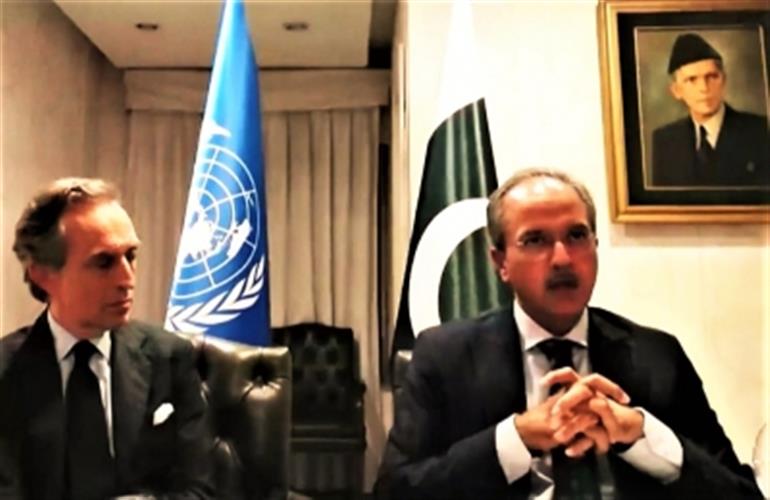 United Nations: Pakistan’s spokesperson has said that although Indian Prime Minister Narendra Modi has tweeted a message of sympathy for the floods ravaging his country, he does not expect the disaster to lead to better relations with India while it is “logical” in these circumstances for countries to ” set aside other considerations and to express support and solidarity”.

Pakistan Foreign Ministry Spokesperson Asim Iftikhar said on Tuesday that first issues like Kashmir would have to be resolved for better relations between the estranged neighbors and messages of sympathy alone do not work in a wider context.

While briefing reporters at the UN headquarters through a video link from Islamabad about the floods in Pakistan, he was asked if he expected more help from India and if a disaster like this could improve relations between the two countries.

He added, “I think you would have seen the statement in Modi’s tweet. I would say that this, you know, this is a humanitarian situation and it’s natural, it’s logical for countries and people to set aside other considerations and to express support and Solidarity. So in that context, we understand.”

Modi had tweeted that he was “saddened to see the devastation caused by the floods in Pakistan. We extend our heartfelt condolences to the families of the victims, the injured and all those affected by this natural calamity and hope for an early restoration of normalcy” .

Iftikhar said that “talking about the wider picture, unfortunately, I think you’ve not seen this attitude, this positive attitude that would build confidence, that would restore the common relationship we have with the country”.

“Despite the goodwill that Pakistan has consistently exhibited (for) six years we don’t see that reciprocated by our friends across the border,” he asserted.

“So these issues need to be addressed” and steps and actions have to be taken to “create an environment that is more conducive to dialogue”.

India has made it a condition for a resumption of dialogue that cross-border terrorism should end.

Iftikhar did not reply to the part of the question about expecting aid from India.

According to media reports in New Delhi, India was considering extending assistance to Pakistan.

Meanwhile, Pakistan’s Finance Minister Miftah Ismail was reported as saying that Islamabad would consider importing vegetables from India given the devastation to Pakistan’s agriculture.

Giving the scale of the devastation in Pakistan, Iftikhar said that more than 33 million people have been impacted by the floods, which have killed more than 1,000 people, destroyed 1 million houses and damaged 2 million acre of crops.

Making the appeal, he said, “South Asia is one of the world’s global climate crisis hotspots” and “people living in these hotspots are 15 times more likely to die from climate impacts”.

His Spokesperson Stephane Dujarric said Guterres is to visit Pakistan next week to show solidarity with the victims of the disaster.